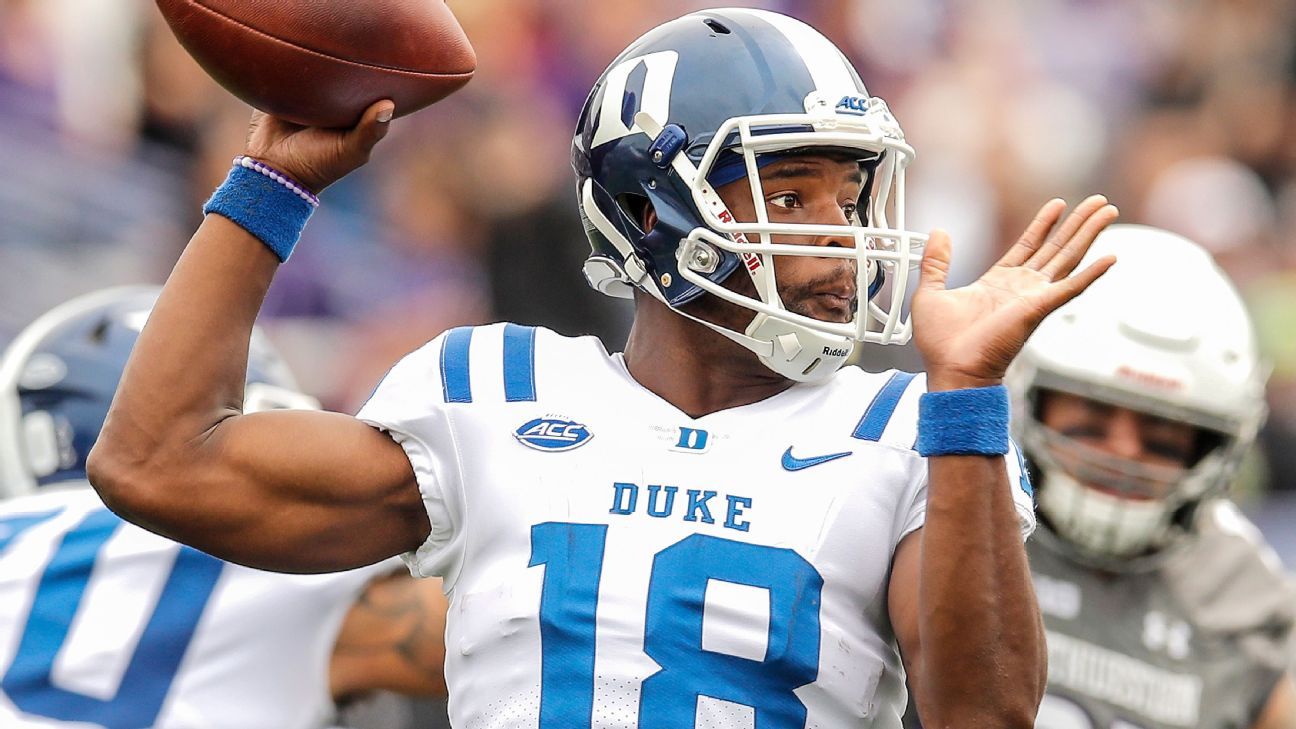 That was a stinker in the 757 last week. Plain and simple. When you show up to a road game with no focus or motivation, that’s what’ll happen to you. It’s surprising that it happened considering Justin Fuente’s constantly preaches the 1-0 mentality. I saw a 0-1 mentality last weekend. Turn the page and move on to the next week.

The Hokies face their biggest test so far this season with Duke. Duke is a surprising 4-0 this season. Maybe we all shouldn’t be too surprised considering Duke has had a solid football program for a number of years. This is a well-coached team that will not beat themselves. They play disciplined football and take care of the ball. The Hokies will have their hands full this week.

That Hokies defensive rank. Ouch. Not very Bud Foster-y. The Hokies are going to need to step up in a big way to stop Duke’s potent offense. They will likely be going up against Quentin Harris. Which is a good thing because injured starting QB Daniel Jones was completing passes at a 74.4% completion percentage before he got injured. That would be bad consider what we saw from Virginia Tech’s secondary last week. Guys to look out for on Duke’s offense is Quentin Harris rushing from the quarterback position, Brittain Brown at running back and TJ Rahming at wide receiver. The Hokies need to also be aware of Johnathan Lloyd as a deep threat against the Hokies young secondary.

If the Hokies want to be successful against Duke’s defense, they are going to need to get their rushing game going. If there is a vulnerability on Duke’s defense it’s stopping the run. This is a game where the Hokies run game will need to open up the downfield passing game.  The Hokies need to try to establish the run early and often. Something they were not able to do last week against ODU. Ryan Willis will need to use his arm and his legs this week to give Duke’s defense trouble. He also need to take care of the ball. If the Hokies turn the ball over, Duke’s offense will make them pay for it.

After three games watching Virginia Tech, I still have no idea about this team. They’ve played three objectively bad teams. Two good results and one really bad one. What we do know is that this defense has issues. They are young and they are going to make mistakes. How quickly they are able to remedy those errors week-to-week will define how successful this season can be. How this team bounces back against Duke will be telling for how the season will play out. Going by the numbers, Duke looks like the better team even if they do field their backup QB. They are like the Hokies but with a better defense (by the numbers). This is a game that could easily go either way but since there are so many unknowns in this game, you go with what the numbers tell you. Duke by 10. 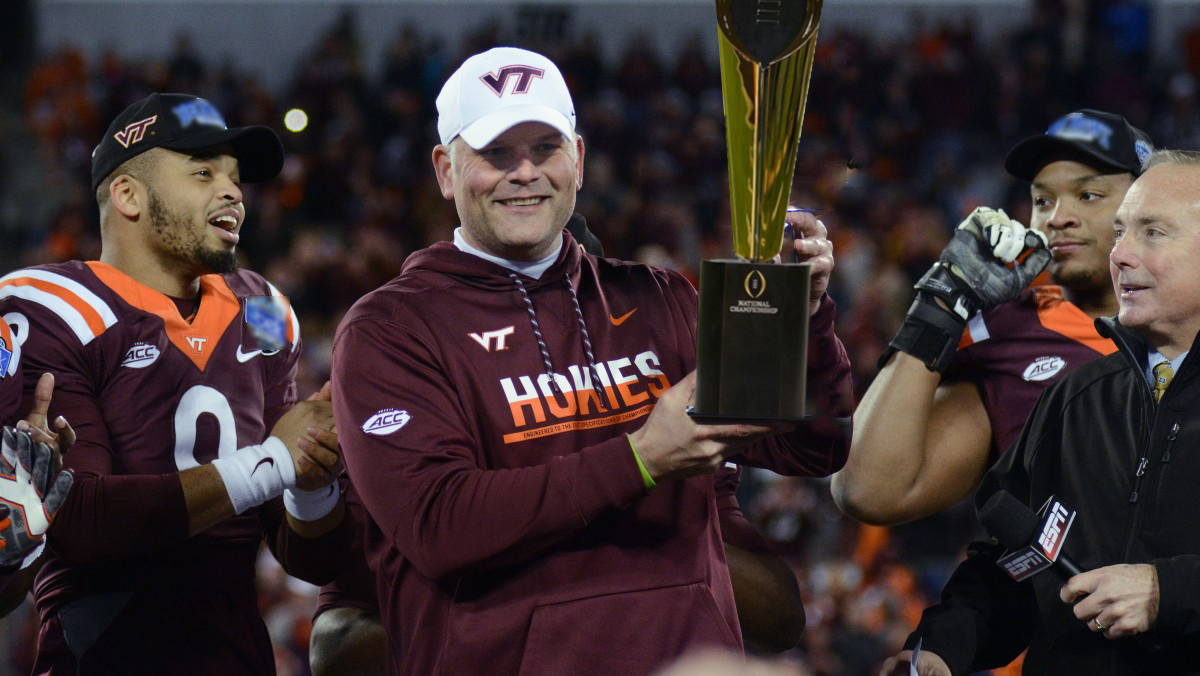 I often hear complaints from Hokie fans. Things like why do we have to play games AT Old Dominion? Why can’t we recruit 4 and 5 star recruits like Clemson? Why do the top recruits in Virginia go out of state? Why don’t we win the ACC anymore? When are we going to be able to compete for a national championship? A lot of this is because of money. Success in big time college football these days is dictated by how much you have to spend and how big your budget is. It’s no surprise that some of the most successful teams in college football also have the biggest revenues to reinvest. 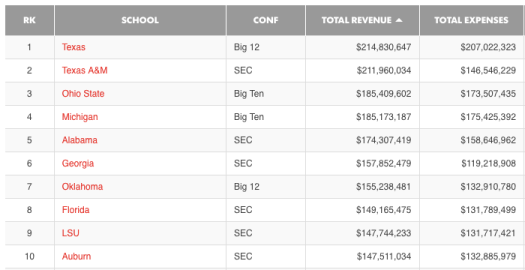 That’s 44th. There are only 65 Power 5 programs.  That’s in the bottom-third of the Power 5. Why is Virginia Tech so low? Largely because it lags behind its conference peers in terms of donations. 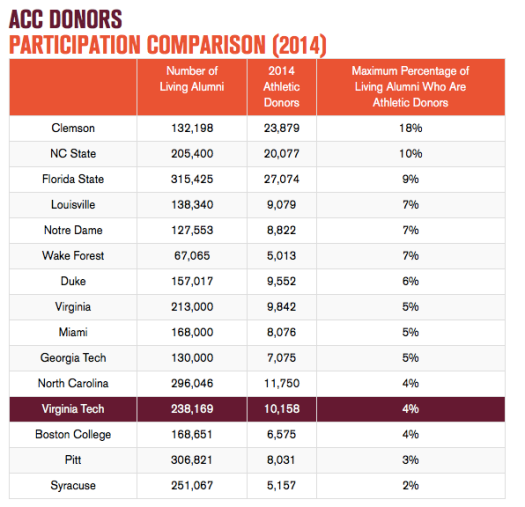 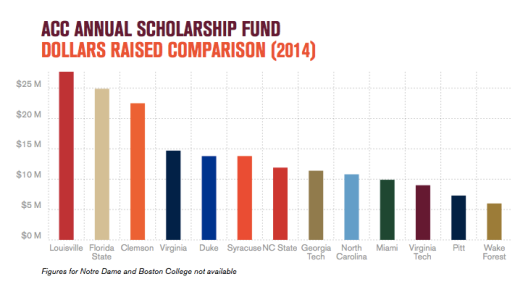 These numbers are a little dated (they are from 2014) and they have improved some since the start of the Drive for 25 fundraising program. But the Hokies still lag behind. As of June 25, 2018 there are still only 13,787 Hokie Club members. Even if you compare that to the 2014 numbers, we’re still lagging well behind Clemson, Florida State and even NC State.

The bigger issue for me is that we have a HUGE alumni base. Virginia Tech has almost 250,000 living alums and only 4% give to Hokie Club. I get that not all of those alums are fans of athletics but still we can certainly do better than 4%. I’m sure more than 4% of our alums attend football and basketball games. I feel like I’ve seen more than 4% of our alums at football and basketball games. 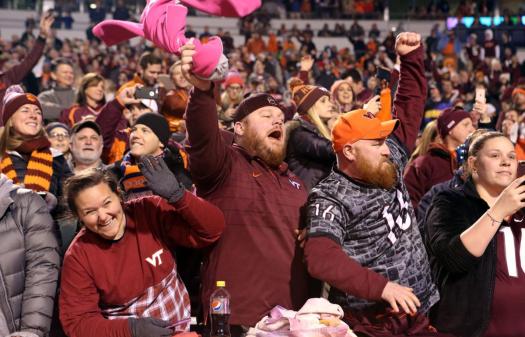 So at this point you might be rolling your eyes say I don’t have a lot of money to give to Hokie Club. I get it. The great thing is you don’t have to. If you give the minimum, it’s only $100 a year or $8.33 a month. If you have a degree from Virginia Tech you can probably afford that. And every little bit helps. Virginia Tech can make up a lot of ground with a lot of small donations rather than a few big ones. Which is why the Drive for 25 wants 25,000 Hokie Club members – not a specific dollar amount. They just want new members.

So consider giving to Hokie Club. First, because you’re giving to a good cause. Virginia Tech athletes work very hard and you’re giving those young men and women the opportunity to get a world class education. Secondly, it’s for the reasons I led off with. With a bigger budget, the Hokies can compete at a level that they haven’t been able to in the past. It gives us more control over who we schedule, who we recruit and where we spend our money – facilities, dorms, support staff, etc. But more importantly, do it because you love Virginia Tech.

TODAY is the DAY! Support Virginia Tech football and join the Drive for 25! 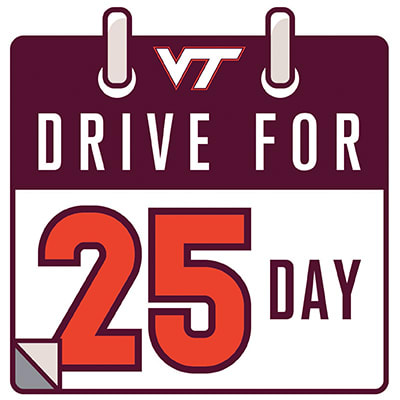 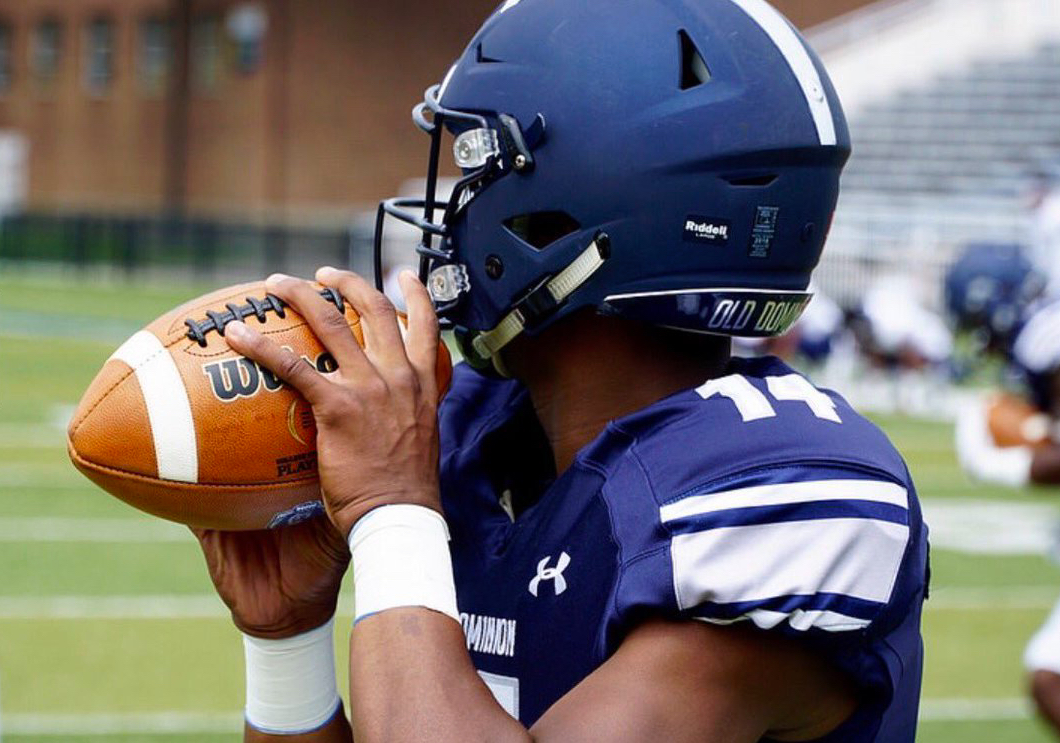 The Hokies had an unexpected bye week after Hurricane Florence cancelled their game with East Carolina. While it was disappointing to not have a game played this past weekend, it does give the Hokies some needed rest and recovery headed into two consecutive road games, a Coastal division showdown with Duke and big-time matchup with Notre Dame.

This week the Hokies travel to the 757 for the first time since 1986 to take on Old Dominion. This game gives me some concern after the Hokies have been off for two weeks, they could come out rusty after a long layoff. The game is also on the road. Road games can always be tough. And this game is leading into big games against Duke and Notre Dame. The Hokies cannot be caught looking ahead.

Old Dominion has struggled so far this season. They were blown out in week 1 on the road against Liberty. They lost in week 2 to Florida International at home. And they lost this past Thursday to Charlotte on the road. Needless to say, it’s not the type of start ODU was looking for.

Looking at this team on paper, there isn’t a lot they do well through 3 games. They have a reasonably good red zone defense and they don’t take many penalties but that might be it. They have struggled on offense, defense and special teams. Keep an eye on a kid Virginia Tech was looking at in recruiting last year, running back LaLa Davis. He has some game breaking ability in ODU’s backfield. They also have a mobile quarterback in Steven Williams. Mobile quarterbacks have given the Hokies some trouble in the past.

The Monarchs should be better on defense. This is a defense that returned four seniors on the defensive line, and seven senior starters on the defense as a whole. Keep in mind that this is a team that finished ranked 92nd in total defense last season. They return a lot of pieces from a defense that was not very good last year. The leader of the defense is Lawrence Garner, their middle linebacker who leads the team with 42 tackles so far this season. Also keep an eye out for defensive end Oshane Ximines who can be disruptive coming off the edge.

This is a game where the Hokies need to bring their 1-0 mentality. They can’t get caught looking ahead to the Duke game. Especially on the road. This needs to be a take-care-of-business game against a team that has struggled through the first three weeks of the season.  There should also be a sizable contingent of Hokies at Foreman Field. If the Hokies can bring their focus, this is a game they should be able to get past without too much trouble setting up a big division showdown with Duke. 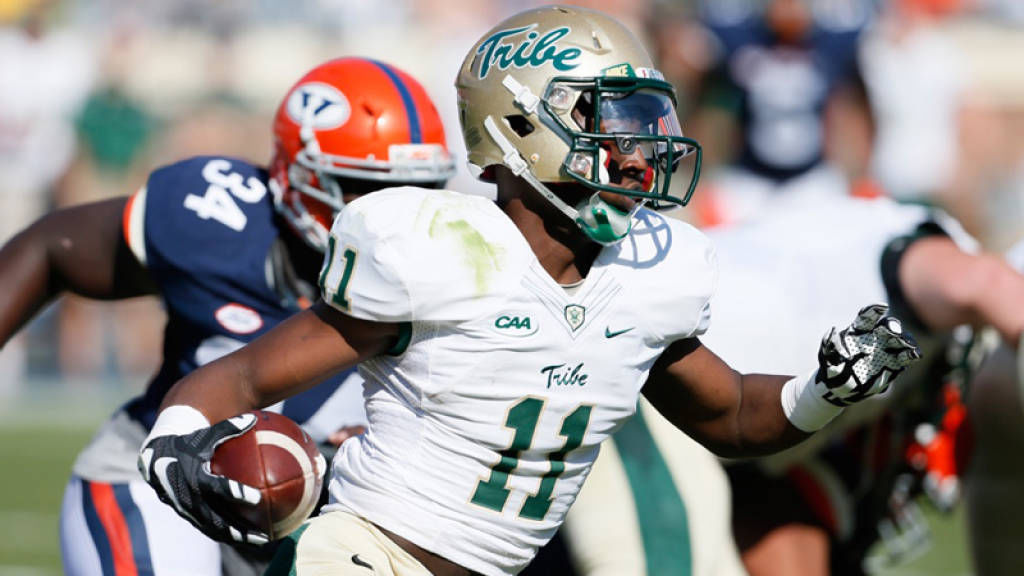 The Hokies got the season off to a hot start on Monday night against Florida State. It was an impressive victory on the road in front of national television audience. Now it’s time to refocus on a short week and get ready for William & Mary. You know the coaching staff will be preaching the 1-0 mentality this week.

The last time the Hokies played on four days rest was in 2015 after they lost to Ohio State on Monday night at home. They played Furman five days later and won 42-3. The five day turnaround is tough, especially after a big win. But if there is one thing the coaching staff preaches is to focus on the next game and go 1-0 this week.

William & Mary is coached by Jimmye Laycock. He is William & Mary’s Frank Beamer. He has been there for 39 years (whoa!) and is the 2nd winningest active coach in Division I. However, William & Mary has started to slide in recent years and only went 2-9 last season. They were also picked to finish 11th in this year’s CAA preseason poll.

William & Mary’s offense only averaged 15 point per game last season. They put up 14 points last week at Bucknell. Needless to say, this team struggles to put up points on offense. The Tribe have a couple of weapons with DeVonte Dedmon at wide receiver and Albert Funderburke at running back. Last season, William & Mary ranked 104th in total offense out of 123 teams in FCS.

The Tribe’s strength is on defense. They ranked 29th in FCS last season in total defense. They return their top five tacklers from last season. They ranked 13th in sacks last year. This is a team that does not take many penalties. They play disciplined football. This will be a good test for the Hokies offense this week. One they should be able to pass but William & Mary’s defense are not pushovers.

The concern here is a lack of focus and execution. It’s difficult to have a short week after a big win and bring your A game. Lucky for the Hokies, they face an opponent that has been struggling in recent years and only put up 14 points last week. This is a team that the Hokies should be able to dispatch without too much trouble, even if they aren’t 100% yet. The key this week will be to try to get up early in the game and give the backups some opportunities in the 2nd half. This is a game you want to put in the win column, not suffer any major injuries, and move on to the next game.