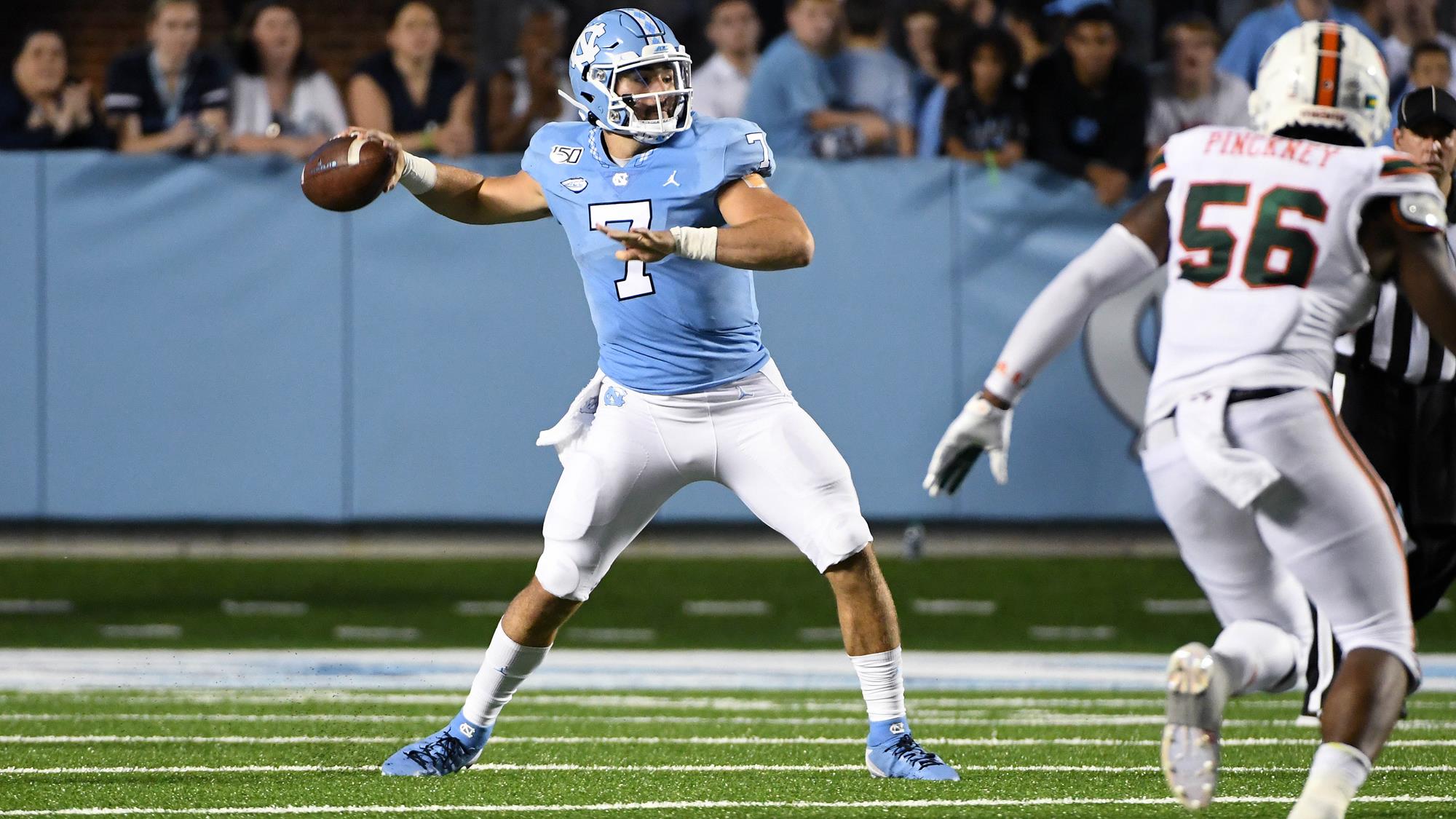 The Hokies didn’t look great against Rhode Island. The Virginia Tech offense only had 8 possessions the entire game. The offense was pretty efficient but it stumbled on a couple of its red zone opportunities. If the Hokies had cashed in, the scoreline would have looked much better. The Hokies offense is going in the right direction, not sure if the same is true about the defense right now.

Expect UNC QB Sam Howell to get his yards against Virginia Tech’s secondary. He has thrown for over 1,500 yards, 15 touchdowns and only 3 interceptions so far this season. Very impressive for a true freshman. The North Carolina offensive line has had some trouble pass blocking. The Hokies defensive line will need to get into the UNC backfield and make life difficult for Howell. This worked well against Miami and the Hokies will need to get back to that type of pass rush against North Carolina. Tech will also need to be able to cover the UNC running backs in the passing game. They use their running backs in the pass game more than the teams the Hokies have faced so far this season.

North Carolina has had trouble covering the passing game this year. The Hokies talented wideouts are going to have to make plays on the outside. Having a healthy Tre Turner and Damon Hazelton will help. Tech will not have much success running inside so they will need to look to the outside running game to find room on the ground. This is also a great opportunity to get Dalton Keene and James Mitchell involved in the offense. The run blocking looked better against Rhode Island. Having an effective run game will help to open up the passing game. Blocking UNC’s defensive line and linebackers will be much tougher than blocking Rhode Island’s.

These teams look similar on paper. Both have average offenses and defenses. The team who can win the one-on-one battles will win this game. Especially in the passing game. The Duke game also looked close on paper and we remember how that turned out. The Hokies’ play-calling may have been a bit vanilla against Rhode Island. The playbook will be open against UNC. Expect a little bit of trickeration from the Hokies. Winning this game would get the Hokies in contention for a bowl and improve their odds for spot in the ACC Championship. A loss and you can forget about the Coastal title and a bowl bid becomes dicey. In the end, Sam Howell makes more plays with his arm and North Carolina wins by a touchdown.

Hooker is the straw that stirs the drink. A dual-threat quarterback brings a new dynamic to this offense. Having a quarterback that can run allows the coaching staff to mix up their play calls. Having a running game has also opened up space in the passing game. Hooker’s presence on the field has given this offense more options and more space to work.

The light has come on for Conner. He is all over the field. He leads the defense with 4 sacks, 6 passes defended, 1 forced fumble and 22 solo tackles. It’s great to have a versatile player like him at the whip position. Having him there gives Bud Foster more options on defense.

This one isn’t even close. Bradburn would be the team MVP if I had to pick one. He’s fourth in the nation in yards per punt with a 48.0 yard average. He booms the ball every time he puts his foot on the ball. He’s a field position weapon that the team needs this year. He may end up as a finalist for the Ray Guy Award. He’s almost a lock for first team All-ACC.

The offense has the potential to look better in the 2nd half due to the emergence of Hendon Hooker. It operates more smoothly with him behind center. The coaches can also open up the playbook a bit more with his threat to run. We’ve already seen the last two weeks that the running game has emerged. This has made the Hokies offense more balanced and less one-dimensional.

The defense appears to have the pieces to be effective but the output is less than the sum of their parts. There is individual talent on this defense but they haven’t played well as a unit thus far. There are still far too many mental mistakes. Tackling has improved since last season, which is good to see. But there are still too many breakdowns from a defense that returned a lot of starters from last year.

The challenge for this team will be to get to seven wins to become bowl eligible. That will mean that they need to split wins and losses the rest of the way to get there. It’s possible. All the conference games look winnable. That Notre Dame game looks tough so I’m not expecting a win there. The remaining games represent opportunities to pick up wins. To make a bowl, this team will need to make strides on offense and defense. If we see the same team we saw in the first half, I’m afraid to say this team will not be bowling this season.

The Hokies were able to get off the mat down in South Florida. It was a great response to bad Friday night at home against Duke. This team hasn’t had a lot of moments to feel good about over the last 12 months. It was nice to see them get a feel-good win against a conference opponent. A game like that can give confidence to a young team. The offense got a spark with Hendon Hooker behind center. The Hokies were able to run for 153 yards with a dual-threat option at quarterback.

Rhode Island has a bad defense, even at the FCS level. This is a team that has struggled to stop the run and the pass. This is a chance for Hendon Hooker and the Hokies offense to get into a rhythm before the North Carolina game. The Miami game showed what this offense could do with Hendon Hooker behind center. The Hokies should spend a lot of the day running the ball. Set up the run first, then go downfield to your deep threats on the outside.

The Hokies need a convincing win. The Hokies had opportunities against Old Dominion and Furman. Those games ended up much closer than most expected. In this game, the Hokies need to use their new run-based offense to run all over Rhode Island. Based on how this offense ran against Miami’s defense, you would expect that to happen. They need to put this game away in the first half. The Hokies shouldn’t show too much on offense ahead of the North Carolina game. 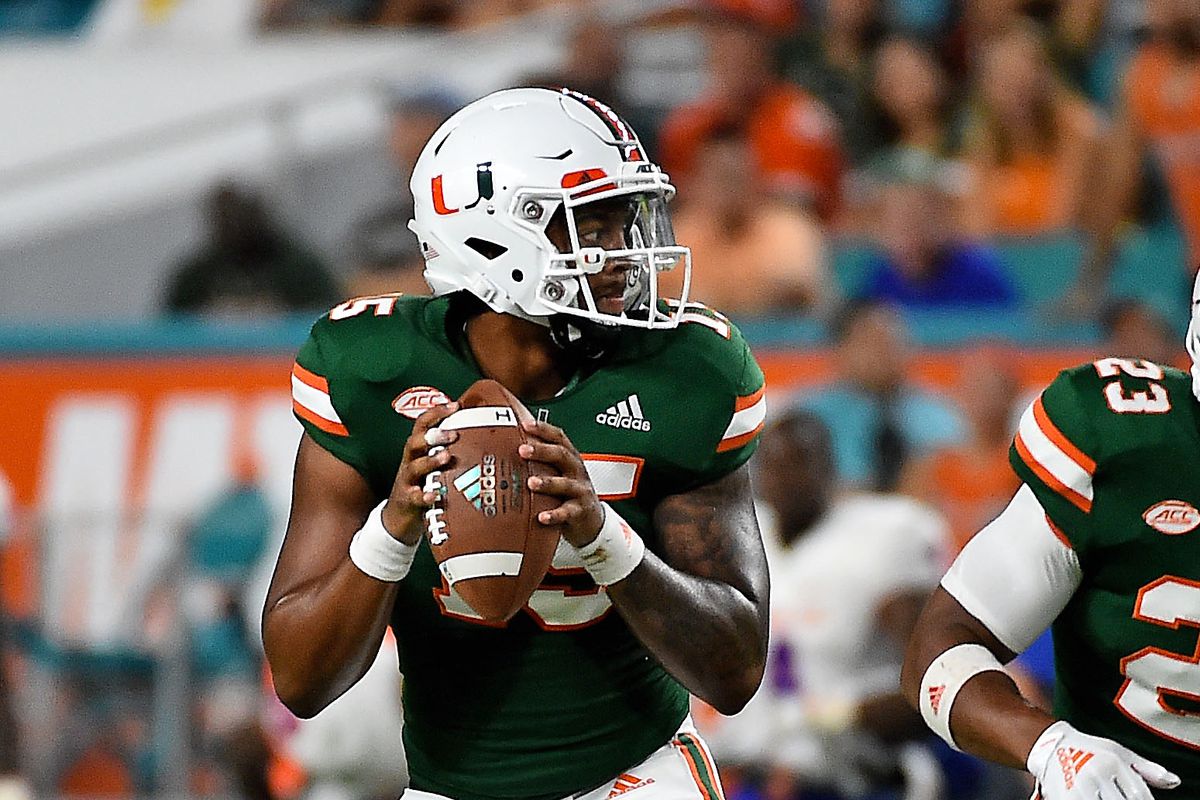 This is about as low as I can remember this program as long as I have been following them. Sometimes you’ll have a team that’s struggling but there is always something they do well that they can lean on. There isn’t a whole lot this team is doing well. There have been some individual players who have been bright spots but this team is struggling on both sides of the ball. That’s a tough combo going into conference play.

The Hokies aren’t the only team struggling on the offensive side of the ball, Miami is in the same situation. Miami starts a young offensive line but, as usual, still have a lot of talent at the skill positions. Expect Jarren Williams and DeeJay Dallas to have big games on the ground. I’m not too worried about their passing game but Jeff Thomas can do some damage getting open downfield. The Hokies need to watch for him when the run opens up the play action pass downfield. There should be some opportunities for big plays against the Hokies’ defense.

The Hurricanes have a talented and experienced defense. This could be one of the best defensive units the Hokies face all season. This team is great at stuffing the run and forcing teams to pass to beat them. The Hokies need to be able to block Miami’s talented trio of senior linebackers. If they can’t, it’ll be a long night for Hendon Hooker and the Hokies offense. Virginia Tech needs to focus on misdirection in the run game to hope to give them a chance to move the ball downfield. Hendon Hooker will need to effectively run the read option. That might slow down Miami’s defense a bit.

If the Hokies hope to stay in this game, the Virginia Tech defense needs to keep Miami’s offense off the board. If Miami is able to put up points in a hurry, this game can get out of hand quickly. Virginia Tech’s best chance to win is to keep this a low scoring game and have Hendon Hooker hit on some plays in the passing game. That will become easier if the Hokies can establish a running game. Completing passes will be challenging considering how well Miami keeps teams one-dimensional. What I am looking for is for effort and want-to from the Hokies. This past week fans and the media have been burying this team. It’d be great to see this team get off the mat and let everyone know this season isn’t over yet. I’ll believe it when I see it.